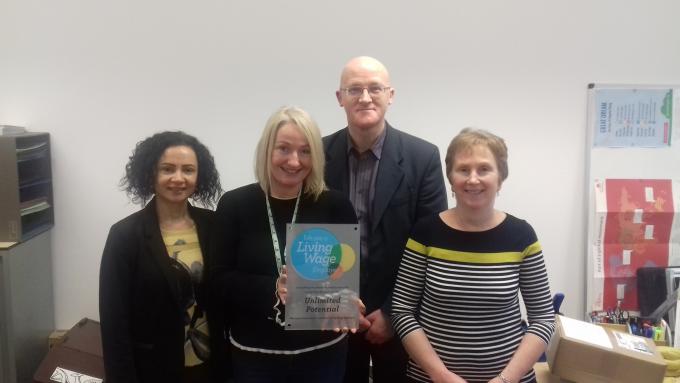 A Salford social enterprise has today been announced as a winner in the Living Wage Champion Awards 2018 - and now aims to drive the city to become the country's first fully Living Wage health and social care system by 2021.

Unlimited Potential, whose work supports people to lead happier and healthier lives, won the Industry Leadership Award thanks to its dedication to promoting the real Living Wage through Salford’s Health and Wellbeing Board.

It has so far successfully supported the accreditation of 11 major Salford health and care organisations as Living Wage employers.

Chris said: “We’re delighted that once again the city of Salford is being recognised for its commitment to the real Living Wage. The accreditation of the 11 organisations is just another step to our city becoming the country's first fully Living Wage health and social care system by 2021.

“The award is a testament to all of the organisations that have contributed to the progress made on the real Living Wage in Salford. Unlimited Potential will continue to champion the need for all health and social care workplaces to implement the real Living Wage.”

Laurence Patrick, Finance Support Officer at NHS Salford Clinical Commissioning Group said “Being paid the real Living Wage not only makes me feel like a valued member of my team but my dedication and hard work is paying off. Having the capacity to be able to save money now for when I return to my final year at university will really take off some financial pressure without having a part-time job and allow me to concentrate on my studies fully.”

The awards, which were sponsored by Aviva, KPMG and the City of London Corporation, saw two other winners of the Industry Leadership Award, including Penrose Care and The Haven Wolverhampton.

Tess Lanning, director of the Living Wage Foundation, said: “Congratulations to Unlimited Potential on becoming a Living Wage Champion award winner. It’s an organisation that does vital work every day, but by paying the real Living Wage, and promoting its wider take-up, it is also leading the way in placing dignity and respect at the heart of its organisation and the wider system in which it works.

“Over 4,200 employers have now signed up to the movement, and their leadership is making a profound difference to the lives of families and communities across the UK. Unlimited Potential’s work in celebrating and championing the real Living Wage has been vital to its success.”

The awards were judged by an independent panel of business and community leaders.