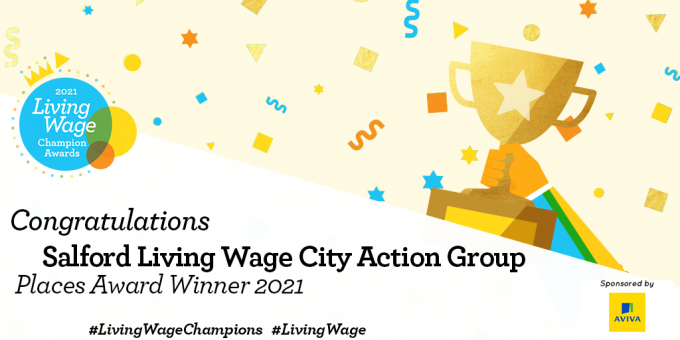 At last night’s national Living Wage Champion Awards, Salford Living Wage City Action Group was recognised for its leadership in helping to spread the real Living Wage within its city. As we look to emerge into a post-COVID world, strengthening local ties within our communities will be crucial in creating a more unified and resilient society, where more people are earning a wage that covers their everyday needs.

Salford is the first place in England to get formal recognition for its ambition to become a Living Wage City. The Living Wage Foundation recognised the city under its Living Wage Places scheme in November 2019.

Over four years, we have been successful in increasing Living Wage accredited employers by nearly 200% across our City, and lifting almost 2,000 employees onto the real Living Wage. Salford’s success is an inspiration for Greater Manchester’s intention to become the first Living Wage city-region.

This award recognises the hard work and collective effort between private, public, VCSE and citizen sectors in Salford and really celebrates what can be achieved by working together.”

Laura Gardiner, Director, Living Wage Foundation, said: “Despite the challenges of the past 18 months, the Living Wage movement has never been stronger – we’ve continued to grow, welcoming our 7,000th employer. We have come together to recognise some of the outstanding work these employers have done. The Living Wage Champion Awards 2021 are a fantastic opportunity to celebrate the importance of a wage that truly covers the cost of living and the value this provides for workers and businesses, and I congratulate Salford Living Wage City Action Group on its deserved award.”

The annual Living Wage Champion Awards celebrate notable employers that pay the real Living Wage and this year they recognised 20 years of the Living Wage campaign. Last night’s awards were hosted by YolanDa Brown, the saxophonist, composer and broadcaster. The awards were sponsored by Aviva.